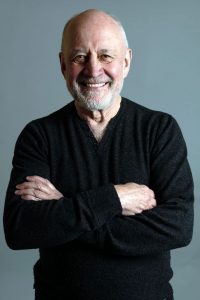 Award-winning physician, considered one of the best in his field in Seattle, WA and in America, professor, poet, photographer, and humanitarian — Dr. Wayne Larrabee is founder of the Larrabee Center.

Wayne F Larrabee, Jr, MD, MSH, FACS is widely recognized as one of the top facial plastic surgeons in the world. Dr. Larrabee is a Clinical Professor and directs the UW Fellowship in Facial Plastic Surgery. He has published over 175 articles and his three books have been printed in multiple editions and many languages- Principles of Facial Reconstruction, Surgical Anatomy of the Face, and The Art and Craft of Facial Rejuvenation. He is the founding editor of the Clinics in Facial Plastic Surgery and JAMA Facial Plastic Surgery. He teaches around the globe and during the past year was the distinguished lecturer at the Chinese University of Hong Kong and honored lecturer in China, Colombia, Mexico, Portugal in addition to many courses in the US. He has directed major international courses in Rhinoplasty and Aging Face Surgery.

Dr Larrabee has been listed as one of the Best Doctors in America for over two decades and was on the cover of Seattle Magazine’s Best Doctor issue. His honors include- Schoenrock Award, Mark Raferty Award, Award from Croatia for ProBono Surgery on War Victims, Ira Tresley Award, Benjamin Schuster Award, Shirley Baron Memorial Award, Joseph Award for outstanding contributions to Facial Plastic Surgery awarded by the European Society of Facial Plastic Surgery and many more.

He is a founding member of the “Face to Face” Program, which provides pro bono surgery and education throughout the world. The Face to Face Program of the AAFPRS also has a project to assist the victims of domestic violence in this country for which Dr. Larrabee received the AMA’s Major Public Service Award in 1996 on behalf of the AAFPRS.  He founded “Global Surgical Outreach,” a Washington State non-profit organization to provide reconstructive surgery for children in China, Ethiopia and elsewhere with the focus on cleft lip and palate deformities. He was awarded a prestigious RealSelf fellowship in 2018 to pursue his pro bono work in Africa.

Dr. Larrabee’s non-medical interests include photography and poetry.  He has published both in numerous literary journals.  He is also the proud father of 7 children.

This website uses cookies to improve your experience while you navigate through the website. Out of these, the cookies that are categorized as necessary are stored on your browser as they are essential for the working of basic functionalities of the website. We also use third-party cookies that help us analyze and understand how you use this website. These cookies will be stored in your browser only with your consent. You also have the option to opt-out of these cookies. But opting out of some of these cookies may affect your browsing experience.
Necessary Always Enabled
Necessary cookies are absolutely essential for the website to function properly. This category only includes cookies that ensures basic functionalities and security features of the website. These cookies do not store any personal information.
Non-necessary
Any cookies that may not be particularly necessary for the website to function and is used specifically to collect user personal data via analytics, ads, other embedded contents are termed as non-necessary cookies. It is mandatory to procure user consent prior to running these cookies on your website.
SAVE & ACCEPT